Interacting with memory is part of every non-trivial program. In order to guarantee successful data processing, it is of utmost importance to correctly manage data buffer sizes. Writing more data than the buffer is able to contain, results in a so-called buffer overflow. The memory region following directly afterwards is overwritten in this case. This chapter tries to explain this behavior and its effect in a detailed and practical way.

Modern compilers and operating systems include protection mechanisms to avoid the effects of buffer overflows. For the sake of simplicity, these mechanisms are neglected for now and explained in later chapters. Example codes include compilation instructions in the first line to disable optimizations and protection mechanisms. All examples but the first one require that ASLR is disabled. Following command disables ASLR on a Linux system until it is enabled again or the machine is rebooted.

To enable ASLR again, use the command below.

As disabling ASLR and running binaries without compiler protection mechanisms imposes a security risk, it is recommended to apply this change and execute the vulnerable applications in a virtual machine or protected environment.

Keeping the theoretical concept from above in mind, a first practical example is presented next.

Executing the code and entering „nufan“ as name results in the output shown below.

Assuming basic knowledge about the C programming language, this behavior should be no surprise. While the code is short and straightforward, it still contains a significant security vulnerability. user.name is a character array with a fixed size of 8 bytes. At the same time, the gets() function does not limit the length of the input. Next, we intentionally exceed the available input capacity.

According to the output we are classified as an administrator although an incorrect name was entered. To retrace this behavior, we will have a look at the memory content after the initialization and after each of the above input cases. GDB is used to inspect the memory of the user variable. Additionally, the relevant memory region is visualized to ease the understanding.

Below you can see a memory-oriented visualization of the GDB output. 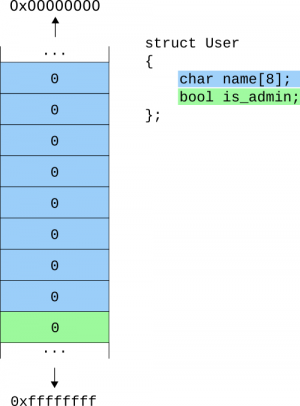 Just like before, we first enter the short name „nufan“ and look at the resulting application state. To inspect the variable before exiting the application we set a breakpoint at the return statement in line 26. 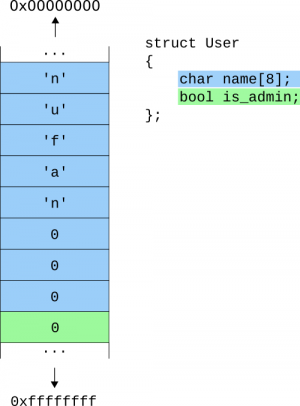 As expected, the memory content looks reasonable. Nevertheless, we still have to look at the second - and much more interesting - case. Using „123456789“ as name exceeds the space of user.name and results in the following state. 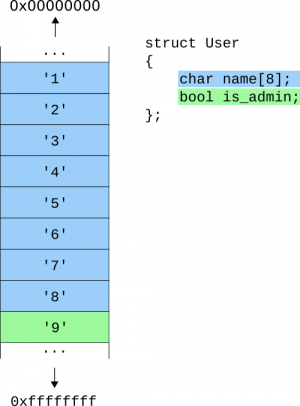 The user.name buffer was completely filled up. Due to the fact that even more data was entered, the '9' character (ASCII value 57) was spilled over to the consecutive variable user.is_admin. Remember that in the C programming language every value other than 0 is considered to be true. Thus, the application classifies the user as administrator.

Simply by overflowing an input buffer the control flow of the application was redirected to an unintended execution branch. Although this example seems harmless as the control flow differs only by a static output, this vulnerability could equally overwrite crucial user data1) or allow an attacker to take full control over the application.

While the previous example already made use of the concept of a buffer overflow, it is rather limited as it is restricted to the use of a predefined control flow branch. With the next example we will take the exploitation one step further.

The example code copies the first command line argument to a variable located on the stack.

Clearly, strcpy() copies an input of variable size into a buffer of fixed size. Note that the code contains a function admin_stuff() which is not part of the regular control flow. However, in contrast to the previous example, no local variable determining the control flow is located on the stack. This time we will not try to switch to a predefined execution branch, rather we want to call admin_stuff() which is an existing function within the binary but outside of any control flow2). Considering the background knowledge explained in the previous chapter about program execution and function calls, we extend the view of the memory to include the information about the stack frame.

The behavior of the application under normal circumstances is observed in GDB. Checking the memory directly after the initialization of the buffer, the top of the stack looks as follows.

We can identify 8 bytes of the buffer variable, 4 bytes of the saved EBP register and the 4 byte return address. Just before finishing execution, the second breakpoint causes the execution to stop.

Now the buffer is partially filled with the entered data. Observe the little-endian byte order of the values.

The goal of this exercise is to overwrite the return address 0xf7e11286 on the stack. Instead of returning to the previous function on the call stack, the control flow should be redirected to the admin_stuff() function. With the protection mechanisms ASLR and PIE disabled, the function has a static address within the binary and at runtime. nm is used to resolve the address of the symbol.

This output shows that the admin_stuff() symbol is located at address 0x08048466 in the text segment of the binary.

In order to overwrite the return address, the 8 byte buffer and the 4 byte EBP copy need to be skipped first. „ABCDEFGHIJKL“ is chosen to fill up this region. The payload is terminated by the address of admin_stuff() (0x08048466) in little-endian format.

Proven by the output, the admin_stuff() function is really executed. Due to the corrupted stack layout the program crashes directly after the execution of the function with a segmentation fault. Remember that strcpy() writes a \0 byte to finalize the destination string which was neglected in the illustrations. All addresses are constant over multiple executions, so the exploit also works outside GDB and with arbitrary fill values for the memory region before the return address.

Although functionally identical to the previous example, the vulnerable program of this section has a larger buffer but does not contain any predefined function we want to call. Additionally, the address of the buffer is printed upon execution.

As the last line of the output indicates, the execution was successfully redirected to the buffer. However, when inspecting the instructions at this location, no meaningful code can be identified:

The program crashes because of invalid memory accesses. Totally understandable, as we only wanted to fill up the memory and did not care about mapping its content to instructions yet. What we need at this point is executable code in compiled form. Generating this code using a high-level programming language most likely introduces unintended instructions, so we fall back to assembly. More specifically, we will use the NASM3) with Intel syntax4) to create our so-called shellcode.

Our final goal is to execute the shell /bin/sh via the execve system call5)6). Calling execve has the following requirements when the interrupt is triggered:

First we need to correct the stack pointer. When returning from the main function, the stack frame is destroyed by increasing ESP. Our buffer is still there, but ESP was moved to a higher memory address. As we want to push some values, we need to make sure ESP points to a memory address lower than our buffer and we do not overwrite our own code. Subtracting 0x30 (48) is a good guess as we want to skip the return address (4 bytes), the saved EBP (4 bytes), buffer (32 bytes) and possibly some stack-alignment padding introduced by the compiler.

Next, we need the \0-terminated string „/bin/sh“ on the stack. As the stack grows from bottom (high memory addresses) to top (low memory addresses), we need to push the string in reverse order. Thus we start with the termination character \0. Keep in mind that we are using strcpy() to copy the data. It has the property to stop copying at a \0 character in the source string, so we are not allowed to have any 0 values in the compiled code. Luckily, there are several ways to calculate 0 without explicitly mentioning it. One common way is to xor a value with itself, which always results in 0 regardless of the used value.

We do not have to care about the size of this termination value, so we push the 4 byte register to the stack:

The remaining string is 7 characters long. To push it as 2 words of 4 byte each, we need to add a fill character. „//bin/sh“ is an equivalent but 8 character alternative to „/bin/sh“.

Now that the string is set up correctly, the registers need to be filled accordingly. EBX needs to point to the name of the binary to execute. „//bin/sh“ was pushed to the stack with the previous commands. Hence, ESP is a pointer to this string and can be copied to EBX.

Successful execution requires argv to be set correctly. This convention is also visible in C programs: argv is an array of pointers to strings (char *argv[]) and terminated by a NULL value. argv[0] contains the executable name.

ECX needs the point to this array of pointers.

Because no environment variables are needed, envp, which is passed via EDX, is set to NULL.

Lastly, the system call number is set to 11 (0x0b) and the interrupt triggered.

We are done! Here is the full code:

After translation with the nasm assembler, objdump is used to extract the executable code from the compiled object file.

A little bit of Bash magic helps to extract the opcodes and bring them into a usable form.

The command calls objdump and uses sed to drop the first seven lines of the output. cut is applied to get the second column in each line, which is the opcode of the instruction. A loop over these opcodes adds the required \x prefix to the output.

Count the number of bytes used for the payload to calculate the required padding.

Feeding this exploit into the application results in a command prompt.

Depending on the command line settings, one might not notice the difference between the spawned shell and the simple termination of the binary. Executing the same command under strace and filtering for execve calls proves the execution of //bin/sh from the vulnerable binary.

The overall memory state correlated with the assembly code is shown in the visualization below.

Finally we managed to execute arbitrary code by exploiting a buffer overflow vulnerability!

Inspecting the code shows that the application prints the address of the buffer and then reads data from the standard input via the gets() function. Following explanation assumes the buffer is located at the address 0xffffd324.

Using the shellcode from the previous section results in the payload structure listed next.

A Perl command helps to generate the input for the exploit. Even if you are not familiar with Perl, make sure you are able to understand and generate inputs in a scripting language (e.g. Python or Bash are perfectly fine as well).

The program exits successfully but without providing us a shell to execute commands. Let's use strace to inspect what is going on.

The output shows that the shell was actually started, but closed immediately afterwards. Although confusing at the beginning, the explanation for this behavior is reasonable. After the shell is started up, it tries to read a command from the standard input. While the input stream was used for sending the payload to the application, we implicitly closed it afterwards. As the shell realizes there is no more input to read, it exits silently. To keep the shell open and enter commands manually, we need to keep the input stream open. One possibility to do so is the following.